There are Sequim spec homes for sale, homes that builders built anticipating they could sell those homes to buyers during or after construction.  During a strong real estate market a Sequim spec home would sell within a reasonable period of time, provided the location was good and the floor plan was what the majority of retirees want when they move here.  There have been a few speculators who built homes that were just plain weird, and those homes sit on the market a long time. 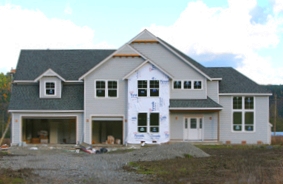 Being a good carpenter and being good at marketing are two different things entirely.  New contractors often get in the market just as it starts turning down. A Port Angeles builder who was not a novice had about 24 spec homes foreclosed upon this past year.  What a disaster that was, but it was obvious he was sailing against the wind when the real estate market crashed and he kept on building like there was no tomorrow.  Those of us who have been in real estate for a few cycles anticipated his foreclosures, because there were no buyers and he had massive lines of credit.

There still are some spec homes on the market, and not all have been foreclosed.  Some are in default to be sure, and will have to be sold as short sales if they are to be sold at all.  But as I have written elsewhere, there is a major problem trying to get a short sale through these days.

This is a true story, although I have changed the numbers slightly and not revealed any names to protect the guilty, although in this case most of the players are innocent victims of a banking system out of control.  (This is not to suggest that the seller is not responsible for his speculation and mortgage debt, because he is.)

I represented some great retirees from the east coast, and having found the ideal home, which happened to be a spec home, I drafted the offer on behalf of my clients, and it was accepted by the seller subject to the bank’s acceptance of less than the balance owed on the mortgage.  The seller had some inkling from his bank that they would accept this price, and my buyer clients were excited to be getting the home of their dreams at a price less than what it would cost to buy the lot, develop it, and build the same quality home.  The seller was glad to get this home out of his inventory and move on to put out some other fires in his portfolio.

A short sale is a necessity today if a bank is to get a house that is in default out of it’s bad loan inventory.   The reality is that the fair market value of homes is low enough and far too many homes were over appraised and refied, so many homes are upside down.  In this case, the buyers and sellers agreed on a price of $329,000.  The balance owed the bank was about $405,000.

Immediately after the parties reached mutual acceptance, the agreement was sent to the seller’s bank for their stamp of approval, and then the agreement would go to escrow for closing in about 30 days.

Alas, after waiting and waiting for weeks and over two months, the deal is dead.  Why?  Because like the other four short sale transactions I’ve been involved with this year, the banks simply won’t respond for months and months until at last the parties just move on with their lives, and eventually the banks foreclose.  In this case, the bank actually did something even more interesting.  After making us wait two months with no response at all, they suddenly raised the price to $405,000.  (Obviously, they forced the seller’s hand here, and made him raise the price, since they would not accept less than what they were owed.)

That’s right.  The fair market value of the home is $329,000, plus or minus, because that is what a ready, willing, and able buyer will pay, and it is the price at which the seller is willing to sell after having this spec home sit on the market for about two years.  (One could argue it is worth $340,000 or even $370,000 maybe, but the market is really weak right now, and this home has been on the market for two years.  My client’s offer was the only show in town.)

Isn’t it amazing that the bank raised the price to $405,000, the amount they are probably owed?  Why would they do something so ridiculous, effectively killing this transaction or any other transaction on the horizon?  This home is doomed to sit empty for another year or two at $405,000, at least in my opinion.

The answer is that the “system” has caught up with the seller (and my buyers), and the system is now in control.  Let me explain.  The bank that originally had this loan was taken over by the FDIC and all the customers and accounts have been assigned to another bank.  But the toxic loans are kept and managed by the FDIC, in this case a Seattle administrative office.

The banking and federal deposit insurance rules and regulations are very complicated, and there are things the FDIC case manager simply does not have legal or administrative authority to do.  He may not have authority to sell a house for less than the amount owed on it.  The FDIC is not a bank or a mortgage institution.  It is governed by different rules, rules that do not necessarily address the facilitation of short sales.

What the FDIC has told me is that they will be wholesaling toxic loans to other financial institutions for pennies on the dollar, maybe only 25% to 50% of the loan balance.  But that will take time.  Maybe in a year or two this Sequim spec home will have finally worked itself through the labyrinthian bureaucracy, at the end of which it will probably sell for less than $329,000, since it will have been sitting vacant and appear to be rundown and worth less.

My argument to buyers is that the best buys in this market are not Sequim spec homes for sale, because these homes are often short sales disasters.  There are many better deals to be had in the multiple listing service in Sequim and Port Angeles, homes for sale by homeowners who are not in default, but are selling at extraordinary prices.

There are some beautiful homes that are not spec homes that are listed as short sales.  If you make an offer on one of these homes, be sure you have a buyer’s agent who knows the process and how to walk you through it.  It is a labyrinthian path for the uninitiated.  I recommend a professional guide.

You can search all Sequim spec homes for sale and all other homes listed for sale here.

Can Sellers Walk Away With Money From a Short Sale?