Diamond Point is near Sequim, and since the homes in Diamond Point are perched on Miller Peninsula overlooking Discovery Bay, hundreds of homes have water views, and some have stunning panoramic water views. 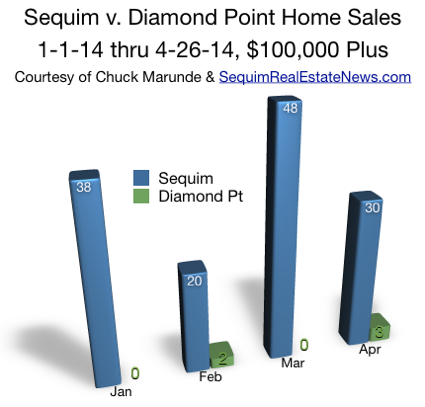 Diamond Point started in 1858 as a quarantine station to care for merchant seamen. In 1898 it officially became the U.S. government quarantine station for all ships entering Puget Sound. Ships from tropical ports often brought smallpox, plague, yellow fever, typhus fever, cholera, and leprosy. In 1936 Diamond Point was declared surplus property and sold to private parties. Eventually in the 1960’s it began to develop as a residential destination. Today it is a favorite retirement haven for people who love the water and water views. There’s also a Diamond Point airport, which is a magnet for retired pilots.

Is Diamond Point real estate a good deal? What are the pros and cons of buying a home in Diamond Point? The big positive is that there are many water views, and the price of a water view is less than in Sequim. The other big positive is the little airport, if you love to fly. There is a boat launch for local residents, and of course, it is quiet and very peaceful. There really is only one negative for some people, and that is the distance from Sequim, which is 15 to 20 minutes. For some buyers, that is nothing, but for others it is simply too far. I should also mention that there is a mix of homes, from old to new, and from mobile home to glorious mansion.