Sweat dripped off their faces. Deltoids and six packs glistened under the glare of the spotlights. From ringside the sound of heavy breathing could be heard between the lightening quick punches. The sickening slap of flesh absorbing a powerful side kick would cause an already excited crowd to moan in unison. No one dared blink . . . inside or outside the cage. Everyone understood the fight could be over in a fraction of a second, and who wanted to miss that? 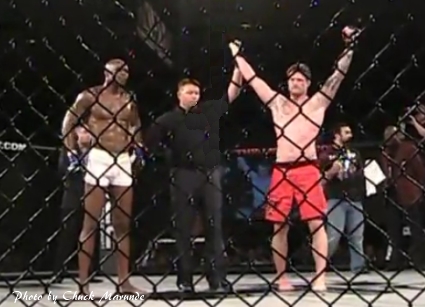 No one understood that better than 6′ 1″ Bristol Marunde at SCC-1 in the cage at Ballys in Las Vegas on May 21st as he faced 6′ 6″ Chuck “The Reverend” Grigsby with an impressive 19-6-0 record and an M-1 champion. Chuck’s height and longer legs and substantially longer reach have intimidated many, and his powerful bombs have knocked out more than a few good fighters.

Bristol came into the fight with less high profile fights and a record of 12-6-0, and not known as well around the world as The Reverend, but all that would change on this night. There’s no question The Reverend entered the ring confident he would win. MMA fans around the world voted their predictions, and the odds were 88% in favor of The Reverend. Only 12% believed Bristol would win. But all those fight fans did not know what the rest of us knew–that Bristol was a fierce competitor who had been training like few fighters in the world.

The first few seconds of the first round was a surprise as The Reverend charged with a barrage of punches, and in a short but unconventional and even awkward looking combination, The Reverend missed with a left uppercut but followed up with a quick right round house and caught Bristol by surprise, knocking him back to the mat. Before The Reverend could take advantage, Bristol was on his feet in a flash and apparently 100%. There was no delay, no hesitation, and Bristol turned the situation into an offensive strategy immediately.

The Reverend must have envisioned himself winning this fight, but his vision fell apart in the first round. He underestimated Bristol’s tenacity, technical skills, and incredibly effective defenses against The Reverend’s superior reach. He also did not comprehend Bristol’s dangerous jabs and well-rounded fighting skills. The Reverend, who came into the ring looking like a muscular version of Tarzan, was simply overpowered by the shorter Bristol. Bristol man-handled The Reverend on the mat and against the cage.

But the biggest surprise for The Reverend were the lightening fast kicks that struck out at The Reverend’s legs throughout the fight. Had these kicks simply been the kicks of the average MMA fighter, The Reverend would not have worried too much, but Bristol’s kicks are some of the most powerful in the cage, bar none. The crowd winced every time Bristol’s foot slammed into a thigh or any part of a leg, and the sound traveled the length of the entire stadium. But the fans weren’t the only ones wincing.

Those devastating kicks took a serious toll on The Reverend. He almost collapsed several times. No wonder. In Bristol’s last fight with Shane Primm, Primm was heard saying to his corner after the fight ended, “I think he broke my leg.” Primm was barely able to leave the ring under his own power. The Reverend had no idea he was about to get punished in front of the whole world in the same way.

The fight card was packed with great fights this night. The quick knockouts are always exciting and at the top of everyone’s favorite list, and we all love a knockout with the rumored “Steven Seagal” Crane technique. But this fight between Bristol Marunde and The Reverend had much more going on behind the scenes in their mutual histories and their technical skills than most fans realized. It may not have been as dramatic for the fans as the TKOs, but the strategies and skills that played out during this fight were textbook material. And believe me when I say that the implications of this victory will reverberate throughout the fight world for years to come. Remember that next time you see Bristol Marunde fight.

Sequim Homes for Sale - 9 Steps to Finding the Perfect Home