Sequim home sales for the first six months of the year from 2005 to 2015 have a very revealing pattern. There’s a cliche that goes like this, “We often come full circle, back to where we started.” In economic theory, such patterns are called cycles. We go from economic expansion to crisis to recession, and eventually back to recovery and expansion. Look at the pattern of Sequim home sales in Sequim and Port Angeles from 2005 to 2015. 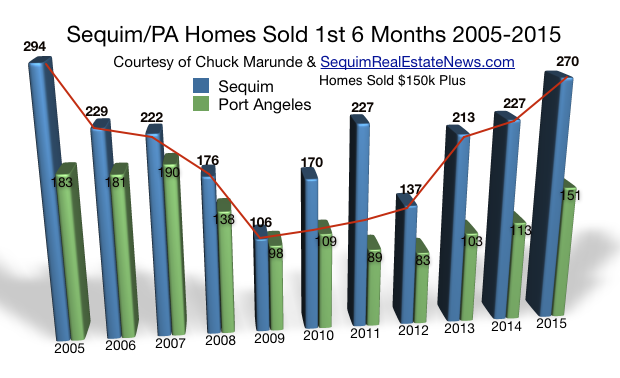 In 2005 in Sequim 294 homes sold above the price of $150,000 in the first 6 months of the year. That number dropped for the next four years to only 106 homes sold, started to recover, but then stumbled until 2013 when Sequim home sales increased to prior levels. For the first 6 months of 2015, we are nearly at 2005 levels again with 270 homes sold. What accounts for this improvement?

Real estate sales have increased in many key areas of the U.S., and since buyers in the Sequim and Port Angeles market are almost entirely from other states, you can expect Sequim home sales to follow trends in the national market, even if the response is delayed. But there’s another reason Sequim home sales are showing us a pattern of long term recovery. Baby boomers are retiring all over the U.S., and they are doing diligent research about where they want to live the rest of their lives. With droughts becoming a serious lifestyle issue on the west coast, the northwest is becoming very attractive, but that’s not the only reason. Low crime, non-existent traffic jams, pristine natural resources, recreation galore, fresh air, pure water, organic vegetables, and very friendly people are just some of the reasons Sequim has become so popular. In other words, Sequim home sales are recovering in part because retirees from all over the country are choosing the northwest over the west coast or southern states.

Sequim home sales have been stronger in 2015 than they have been in 10 years, going all the way back to the all-time peak of sales in 2005. I don’t know anyone who predicted the recession would last so long, but this chart of Sequim home sales makes a strong argument that the Sequim real estate market is recovering.