Sequim land for sale has not been selling much in 2009, 2010, and thus far in 2011.  That’s not front page news, but if you wondered how land has been selling in Sequim and how many people plan to build their own homes, here is the answer. 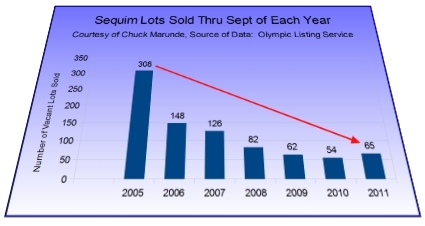 Why have we sold more lots in 2011 than in 2010?  I believe there are two primary reasons.  First, retirees put many of their plans on hold in the summer of 2010 as they watched the economy implode and as they observed the political dissension, all creating great tension and uncertainty.  We still have uncertainty, but the majority of retirees have told me that they have weathered the storm and their plans to retire and move to Sequim, Washington, cannot be put on hold forever.  Their time for retirement is here, and they have been planning this transition for a long time.  They’ve looked at Sequim land for sale and at the exiting inventory of homes in the MLS.  They also have come to some resolution in their own minds that economic and political concerns may be the new normal.  Many retirees have decided to make their move this year.  As several couples have told me, “We’re not getting any younger.”

Second, many retirees have not been able to find the ideal existing home in the MLS, so they have opted for buying a lot and building their own home, even though it will cost a little more.  As I have written elsewhere, the best homes in the best areas at the best prices have been selling, even in this market, and those home are gone forever.  That means the ideal homes that so many retirees would want are disappearing from our small inventory, and building one’s own home becomes more essential.  But the other reason retirees have decided to build their own home is because many have a very specific ideal of what they want their retirement home to look like.  Some call this their last home.  What price do you put on your last home?  In other words, if you could buy an existing home that “would work,” but the ideal home you could retire in for the rest of your life could be built and cost you $10,000 or $30,000 more, would it be worth it?   This is why so many have been looking at Sequim land for sale.

One Acre Properties Hard to Find

Beware the Cost of Land in Sequim

Sequim Land for Sale and Due Diligence Checklist

Sequim Buyers Agent Sells The Most Homes in 2011